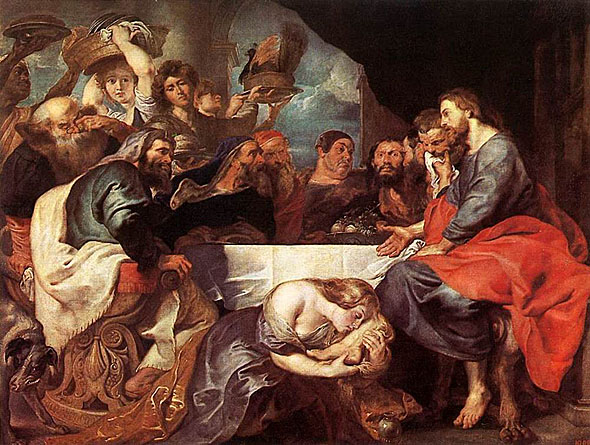 “Jesus answered him, “Simon, I have something to tell you.” “Tell me, teacher,” he said.  “Two people owed money to a certain moneylender. One owed him five hundred denarii, and the other fifty.  Neither of them had the money to pay him back, so he forgave the debts of both. Now which of them will love him more?”  Simon replied, “I suppose the one who had the bigger debt forgiven.” “You have judged correctly,” Jesus said.” (Luke 7.41-43)

In the last blog entry we looked at the significance of this parable that Jesus used to teach Simon the Pharisee about the true nature of sin.  On the surface it may appear that one person’s indiscretions are greater than another’s, but under the surface the reality is the same.  Sin breaks relationship with God, alienates us from our maker, and results in death.

As we move into the final 3 weeks leading up to Easter, another aspect of this parable is worth reflecting on. “Two people owed money to a certain moneylender. One owed him five hundred denarii, and the other fifty.  Neither of them had the money to pay him back, so he forgave the debts of both.”

If a moneylender decides to forgive the debt, what happens to the debt?

Think of it in modern terms.  If you take out a huge loan to buy a house, and then default on the loan, does the debt just disappear?  No, the lender has to pay that debt somehow.  Perhaps they fire some people because of the debt.  Perhaps they raise prices on other customers to pay the debt.  Maybe they just pay it out of pocket.  But the debt does not just disappear.  It still has to be paid for.  If the debtor does not pay the debt, then the lender must.

This is the point of Passion Week.  God came into human form in the person of Jesus Christ.  Jesus of Nazareth never sinned, and therefore was in the debt of no one.  He owed nothing.  Yet he who knew no sin became sin, so that we could be forgiven (2 Corinthians 5.21).  In other words, someone had to pay the cost.  If it wasn’t the debtor (us), then it would have to be the lender (God)

That is what the lender did in this parable and what Jesus did on the Cross.  If you don’t see the extent of your sin then you are not going to be amazed by the grace and love and sacrifice of God.  This is what amazes and changes this woman forever.