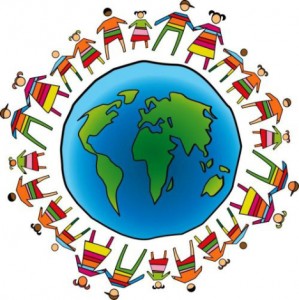 I am doing a blog series on a sermon from Paul the Apostle, found in Acts 17.16-34. This is typically referred to as his time at “Mars Hill,” the Roman name for the gathering spot in Athens where all the action happened. One of the most well known phrases in the Bible comes from here: “in him we live and move and have our being.”

The overall point of this address is Paul’s desire to articulate a vision of the resurrected Christ. But to do so he chooses a handful of major theological themes through which he hopes an extremely diverse crowd of people will be able to accurately see Jesus. I’m moving through them one at a time, (here are parts 1, 2, 3, 4, 5), and want to do a couple of posts on this famous part of the sermon (the beginning of the sermon is included as well for context):

“The God who made the world and everything in it is the Lord of heaven and earth and does not live in temples built by hands. And he is not served by human hands, as if he needed anything. Rather, he himself gives everyone life and breath and everything else. From one man he made all the nations, that they should inhabit the whole earth; and he marked out their appointed times in history and the boundaries of their lands. God did this so that they would seek him and perhaps reach out for him and find him, though he is not far from any one of us. ‘For in him we live and move and have our being.’ As some of your own poets have said, ‘We are his offspring.'” (Acts 17.24-28)

In order to make one of the most important points of his sermon, Paul borrows from some of the poets of the time (an interesting topic in and of itself, but for another day). He says something that is as simple as it is elegant: we are all the offspring of God. To even partially draw from the deep riches of that truth leads to an experience of joy that can be described only through poetry.“For in him we live and move and have our being.”

This is not the only time that Paul makes the connection between joy and our ability to live from our identity as children of God. In his richest section written on the topic of transformation, Paul talks repeatedly about “putting off” the things that define us outside of Christ, and “putting on” our identity as children of God (I talk a lot more about that here and here if you are interested).

One of the reasons that Paul is able to make this a central expression of spiritual transformation is because it was true even in the earthly life of Jesus. All four Gospel accounts make note of where the genesis of his power began. Before Jesus ever performed a public miracle, or healed a sick person, or told an amazing parable, he rooted his identity in being “the offspring of God.” This is what allowed Jesus to “live and move and have his being.” Here is Matthew’s account:

“Then Jesus came from Galilee to the Jordan to be baptized by John… As soon as Jesus was baptized, he went up out of the water. At that moment heaven was opened, and he saw the Spirit of God descending like a dove and alighting on him. And a voice from heaven said, “This is my Son, whom I love; with him I am well pleased.” (Matthew 3.13-17)

These are the words of identity, of transformation, and of boundless joy: “This is my Son, whom I love; with him I am well pleased.” The outpouring of love was not a response to an impressive performance or squeaky clean record. It was based on his very being. Jesus was beloved because he was the Son of God. Period.

This was foundational to the life and ministry of Jesus Christ. After experiencing this revelation of love in the Jordan River, Jesus would head to the desert to be tempted by the devil. There he would have his identity challenged over and over again. Though the specifics of each temptation varied, they all shared the same essence: “If you are the Son of God…” It was an assault on his identity and on his personhood.

Jesus stayed true to the words that he had heard in the River, and consistently rebutted the attacks of the devil. But that was only the beginning. From that point on there would be a nonstop stream of voices who would attempt to define his worth, value, and ultimately, his identity.

Some of these voices attempted to define him negatively. He would experience rejection, scorn, name calling, and mocking of all sorts. He would experience isolation, loneliness, and persecution. Any combination of these could have caused him to question his true value, and stolen his joy.

Some of these voices attempted to define him positively. He was praised for his oratorical abilities, and people marveled at his ability to supersede the natural order with his ability to perform miracles. He was able to effortlessly draw a crowd, and could have cashed in his popularity at any point if he so chose. It would have been so easy to draw a superficial sense of value from any of these positive reinforcements.

But at the end of the day, Jesus knew who he was. He didn’t allow either negative or positive perception to define his value and worth. Nor did he allow the presence of the evil one to steal his joy. He continued to come back to the essence of his true identity. He was the Son of God. He was the beloved.

It was only this reality that allowed him to live and move and have his being.

It’s easy to look at his example and say, “Well yeah, that was Jesus!” But can we ever hope to live with that same type of internal buoyancy? Can we ever have that level of identity security? Can we live that type of fortitude?

The answer from Paul is a resounding YES!!! This is the direct connection that he is making when he says, “For in him we live and move and have our being.” Those first three words are the key: “For in him…”

Like Jesus, we will be constantly tempted to listen to outside voices that would attempt to define our worth and value. Some of them are undeniably negative – the voices of neglect, abuse, depression, loneliness, awkwardness, isolation (and others) consistently suggest that we are unloveable. Some of them present themselves as positive – the voices of artistic achievement, career advancement, educational milestones, income bracket (and others) would try to convince us that we have finally proven ourselves.

Yet at the end of the day, we remain empty when these voices are given too much power. These voices are not designed to have that kind of authority, and our internal equilibrium remains in flux when they are allowed to operate unchecked.

What we so badly need is the transformational truth that Paul’s words point to. “For in him we live and move and have our being.”

This is not something that can be faked. The point is never to present yourself as more joyful, alive, or spiritually connected than you actually are.

My prayer for both myself and for you is simply this. That we would rest in the truth of who we are, that we would delight in the God who delights in us, and that we would live and move and have our being in the one that is life itself.